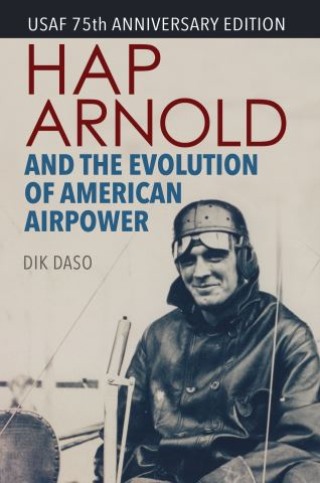 Hap Arnold and the Evolution of American Airpower

Taught to fly by the Wright Brothers, appointed the first and only five-star general of the Air Force, and remembered as the man who won World War II’s air war, Henry Harley “Hap” Arnold is one of the most significant figures in American aviation history. Despite his legacy as an air pioneer, little has been written about him. In the thoroughly detailed Hap Arnold and the Evolution of American Airpower, reprinted to celebrate the 75th anniversary of the United States Air Force, biographer and former military officer Dik Alan Daso draws on primary sources like Arnold’s personal papers and formerly declassified military documents to sketch out his incredible life and career.

Daso describes important technology, institutions, and individuals who influenced Arnold’s decisions as a general, and reveals how the peacetime experiences of World War II’s foremost military airman shaped the evolution of American military aviation. This biography captures the adventurous career, dynamic personality, and bold vision of the “father of the Air Force.”