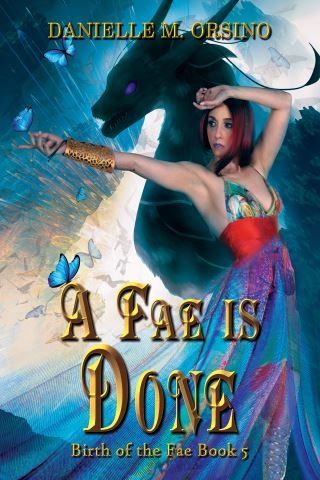 A Fae is Done

Prophecies, broken hearts, secrets, and scars. Bodies delivered on the wings of butterflies.
After Queen Aurora's execution, the Court of Light falls into political unrest. The riots continue as new Queen Sekhmet takes her place on the throne and puts her long-planned agenda into action. Meanwhile, King Jarvok attempts to remedy his heartache but ends up divulging suspicions he has held close for centuries instead.
Alliances shift as dark mysteries bubble to the surface, but a prophecy reading brings a ray of hope. Unfortunately for others, it foretells certain doom. The Oracles speak of a future child who will unite the Fae courts and bring karmic retribution. Unlikely heroes will be forced together by fate, while unexpected enemies are revealed.
There are Fae in both courts who have plenty to hide. Some would kill to keep their secrets. Some are willing to die for them.

Danielle M. Orsino: Danielle M. Orsino — destined to be a writer from a young age — was working as a nurse, treating a patient who needed some distractions during long treatment sessions, when inspiration struck. Orsino reached back to a forgotten skill, a childhood dream. From a young age, she had wanted to be a writer, so she decided to tell her patient a story. Little did she know a seed was planted that day; a seed that would grow into a fantastically epic adventure of heartbreak, hope, and rebirth: Birth of the Fae: Locked Out of Heaven. Drawing from her passion for comic books, cosplay, and the fantasy genre, along with her martial arts expertise, Orsino brings forth an electric and hopeful book debut. She is taking on her biggest challenge to date — a story born from the long treatment sessions with a patient, and building it into a fantasy book series, Birth of the Fae. ​ Expanding on her love of writing and comics, and exploring the world of fantasy novels, she delves into the realm of fairies, retelling their origins from a completely new perspective.