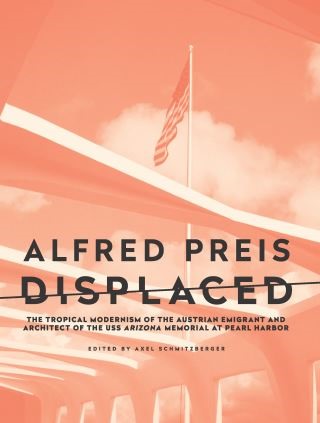 The first publication to catalog the complete works of architect and arts advocate Alfred Preis, a Viennese modernist who fled Nazi-occupied Austria and transformed regional Hawaiian architecture, with his best-known project being the USS Arizona Memorial at Pearl Harbor.

Architect, planner, and arts advocate Alfred Preis (1911–1994) dedicated his many creative talents to his beloved, adopted home, Hawai‘i. Born to a Jewish family, raised, and educated in Vienna, Preis became an exile after escaping from Nazi-occupied Austria in 1939 and briefly being interned as an “enemy alien” when the United States entered World War II. Preis emerged as one of Hawai‘i’s leading modern architects in the 1950s and 1960s. His celebrated architectural career spanned twenty-three years. In this time, he designed almost one hundred and eighty completed projects ranging from residences, schools, commercial buildings, and public parks. His new, regionalist vision for architecture and planning were specific to the Hawaiian context, its people, its tropical climate, and its stunning landscape. Preis’s crowning achievement was his design for the famed USS Arizona Memorial at Pearl Harbor in 1962.

This is the first publication to examine Alfred Preis’s body of work in architecture, which spans from 1939 to 1963, including not only several acclaimed public projects but also illustrating the transition from a European modern language into a regional modernism, unifying both cultures in distinct and pioneering ways.

In later years through his legislative work, Alfred Preis became a visionary advocate and leader for the public arts, creating the first 1% law in the United States, which stipulated that 1% of all public building construction be used for the purchase of public art.

Axel Schmitzberger is a licensed architect and professor at California State Polytechnic University, Pomona. Including his current engagement, he has taught at various academic institutions in the United States, Taiwan and Austria in the areas of Architecture, Multimedia and Graphic Design. He practiced in various architectural design and multimedia offices on internationally recognized projects prior to relocating to Los Angeles. After working for Morphosis Architects on several international buildings, he pursued his own practice APLATFORM, a multidisciplinary design office, and academia. He is the recipient of several awards for his internationally published residential, commercial and graphic design work. He has in the past received grants from the PCI foundation and the Austrian Ministry of Art, Culture, Civil Service and Sport. In 2019, he co-curated the exhibition Resident Alien — Austrian Architects in America at the Austrian Cultural Forum in New York. This was followed by an online exhibition on the Austrian-Hawaiian architect Alfred Preis in collaboration with the Austrian Foreign Ministry and Laura McGuire of University of Hawai‘i at Mānoa. He currently divides his time between working in his practice APLATFORM and teaching. He resides in Los Angeles, Hawai‘i and Austria.