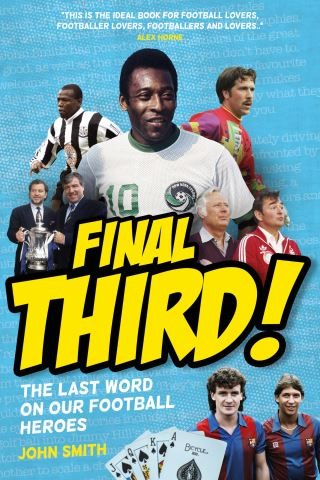 The Last Word on our Football Heroes

Final Third: The Last Word on our Football Heroes serves up another batch of funny, absurd and jaw-dropping tales discovered within more than 300 footballer autobiographies. Author John Smith has pored over the memoirs of the great and the good - as well as the not so good - so you don't have to. You're welcome. Final Third paints an intimate picture of our favourite football figures, using their own stories to show what makes them tick, what unites and divides them and exactly what they are prepared to share with us. They've seen things you wouldn't believe! The eye-opening stories include a defender deliberately driving a golf ball into Jimmy Hill's house, a goalkeeper confronted by a witch doctor in his penalty area, one football legend asking another to scale a church tower to stop the bells ringing, a manager who was like catnip to the wives of his directors and the England captain who drifted down the Thames. It all adds up to a fun third volume of the definitive digest of the autobiographies of our football heroes.

John Smith: After co-authoring Booked! and Second Yellow, John Smith returns with a third look at more absurd, intriguing and funny tales found in more than 300 football autobiographies. With a day job in comedy and sport TV, John has written for Four Four Two, Guardian Online, Late Tackle, Hammers and Blowing Bubbles, and for shows such as Blankety Blank and Crouchy's Year-Late Euros. He is also a co-host of the Football Legends podcast.