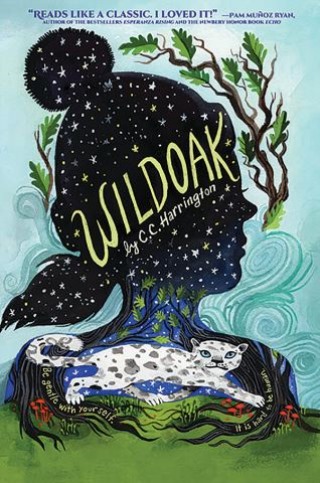 When the fates of a snow leopard, a child, and an ancient forest collide, the unimaginable can happen. Perfect for fans of Pax and The One and Only Ivan.

Maggie Stephens's stutter makes school especially hard. She will do almost anything to avoid speaking in class or calling attention to herself. So when her unsympathetic father threatens to send her away for so-called "treatment," she reluctantly agrees to her mother's intervention plan: a few weeks in the fresh air of Wildoak Forest, visiting a grandfather she hardly knows. It is there, in an extraordinary twist of fate, that she encounters an abandoned snow leopard cub, an exotic gift to a wealthy Londoner that proved too wild to domesticate. But once the cub's presence is discovered by others, danger follows, and Maggie soon realizes that time is running out, not only for the leopard, but for herself and the forest as well.

​Told in alternating voices, Wildoak shimmers with beauty, compassion, and unforgettable storytelling as it explores the delicate interconnectedness of the human, animal, and natural worlds.

C. C. Harrington:
Christina grew up in the UK. She spent her summer holidays in Cornwall where she loved to climb trees and run barefoot along pebbly beaches. She loves the natural world and believes that stories, much like the roots of an ancient forest, are capable of connecting readers and listeners in essential ways. Wildoak is her first book. She graduated from Oxford University with a degree in English Literature and has since worked for a newspaper, taught literacy to children with learning differences and studied printmaking. She now lives in Maryland with her family and a dog who loves to eat manuscripts. You can learn more about her work at ccharrington.com