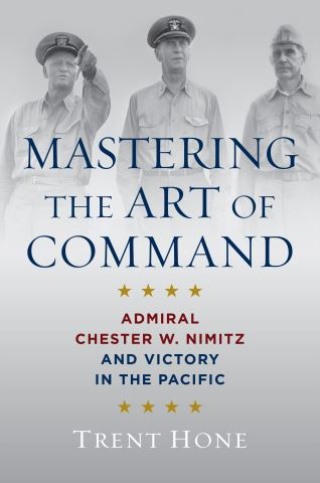 Mastering the Art of Command

Admiral Chester W. Nimitz and Victory in the Pacific

Mastering the Art of Command is a detailed examination of Admiral Chester W. Nimitz’s leadership during World War II. It describes how he used his talents to guide the Pacific Fleet following the attacks on Pearl Harbor, win crucial victories against the forces of Imperial Japan, and then seize the initiative in the Pacific. Once Nimitz’s forces held the initiative, they maintained it through an offensive campaign of unparalleled speed that overcame Japanese defenses and created the conditions for victory.  As a command and operational history, Mastering the Art of Command explores how Nimitz used his leadership skills, command talents, and strategic acumen to achieve these decisive results. Hone recounts how Nimitz, as both Commander-in-Chief of the Pacific Fleet (CINCPAC) and Commander-in-Chief of the Pacific Ocean Areas (CINCPOA), revised and adapted his organizational structure to capitalize on lessons and newly emerging information. Hone argues that Nimitz—because he served simultaneously as CINCPAC and CINCPOA—was able to couple tactical successes to strategic outcomes and more effectively plan and execute operations that brought victory at Midway, Guadalcanal, the Marshall Islands, the Philippines, Iwo Jima, and Okinawa.   As a study of leadership, Mastering the Art of Command uses modern management theories, and builds upon the approach in his award-winning Learning War. Trent Hone explores the challenge of leadership in complex adaptive systems through Nimitz’s behavior and causes us to reassess the inevitability of Allied victory and the reasons for its ultimate accomplishment. A new narrative history of the Pacific war, this book demonstrates effective patterns for complexity-informed leadership by highlighting how Nimitz maintained coherence within his organization, established the conditions for his subordinates to succeed, and fostered collaborative sensemaking to identify and pursue options more rapidly. Nimitz’s “strategic artistry” is a pattern worthy of study and emulation, for today’s military officers, civilian leaders, and managers in large organizations.