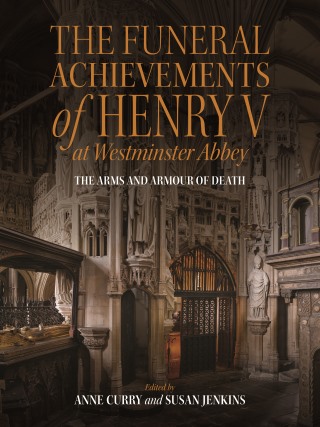 The Funeral Achievements of Henry V at Westminster Abbey

The Arms and Armour of Death

Before Henry V set out in 1415 on the campaign which culminated in victory at Agincourt, he made a will laying down precise instructions for a chantry chapel to be constructed in Westminster Abbey after his death, so that he could be buried close to his saintly ancestor Edward the Confessor. Seven years later the king died at Vincennes, and his body was brought back for burial in the Abbey; the elaborate funeral took place on 7 November 1422. His chapel was probably finally completed in the 1440s, and remains a distinctive feature of Westminster Abbey to this day.
This book, stimulated by the 600th anniversary of the death of this iconic king, sheds new light on his funeral service and the design of his ornate chantry chapel and tomb. It also considers each of the "funeral achievements" - saddle, helm, shield and sword - traditionally associated with him. Drawing on up-to-date research by experts in each field, with exciting input from new technologies, it investigates the construction and form of the arms and weapons, as well as providing fascinating insights into the material culture and commemoration of royalty in the fifteenth century and beyond.
Anne Curry is Emeritus Professor of Medieval History at the University of Southampton. Susan Jenkins is Curator of Westminster Abbey.