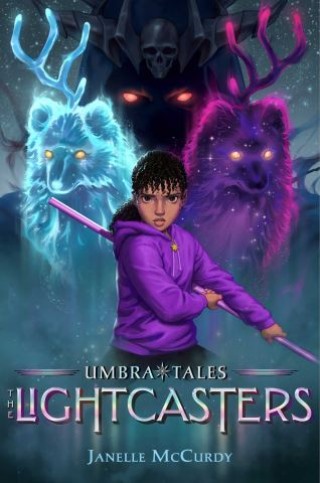 Keeper of the Lost Cities meets Pokémon in this riveting first book in a middle grade series about a girl who embarks on a treacherous journey with her mystical animal companions to save her family—and the entire kingdom.

Twelve-year-old Mia McKenna has grown up in the darkness. It’s all she’s ever known, and she finds comfort in it. Like nearly all the cities in the Kingdom of Lunis, her home of Nubis was plunged into a forever night years ago by the shadowy Reaper King—a figure now only known in nightmares, a cautionary tale warning children to stay safe inside the tall city walls.

But all that changes when a mysterious cult storms Nubis, capturing everyone with the ability to protect it—including her parents, the rest of the umbra tamers, and their mystical, powerful creatures made of shadow and starlight.

Now, Mia and her brother, Lucas, are the city’s only hope of survival, and Mia must learn to harness her umbra taming abilities to stand any chance of saving her city and rescuing her parents. If she can’t, she’ll lose her soul, and her family, to the Darkness forever.

Janelle McCurdy: Janelle McCurdy is an author and fully-fledged gamer. Having started writing and querying at only sixteen years old, she joined Jo Unwin Literary Agency (JULA) in her early twenties. After graduating from Royal Holloway University with a criminology and sociology degree, Janelle moved back home to London and began writing middle grade fantasy. In her free time, you can find her holed up in her room, gaming and watching anime (some of her favorites being Inuyasha, Dragon Ball Z, and Death Note), or attending numerous comic cons and gaming events.