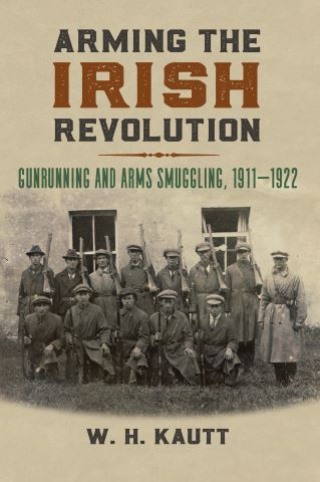 Arming the Irish Revolution is an in-depth investigation of the successes and failures of the militant Irish republican efforts to arm themselves. W.Â H. Kautt’s comprehensive account of Irish Republican Army (IRA) arms acquisition begins with its predecessors—the Irish Volunteers and the National Volunteers—and, counterintuitively, with their rivals, the pro-union Ulster Volunteer Force. After the 1916 Rising, Kautt details the functioning of the Quartermaster General Department of the Irish Volunteer General Headquarters in Dublin and basic arms acquisition in the early days of 1918 to 1919. He then closely examines rebel efforts at weapons and ammunition manufacturing and bombmaking and reveals that the ingenuity and resources poured into manufacturing were never able to become a primary source of weapons and ammunition. As the conflict grew in intensity and expanded, the rebels encountered increasing difficulty in obtaining and maintaining supplies of weapons and ammunition since modern weapons in a protracted conflict used more ammunition than previous generations of weapons and their complexity meant that the weapons could not be clandestinely produced within Ireland. Thus, as the rebels conducted campaigns that became difficult to combat, their greatest limiting factor was that most of their weapons and ammunition had to be imported.

Arming the Irish Revolution is the first work of research and analysis to explore in detail the Irish work inside Britain to establish arms centers and to conduct arms operations and trafficking. It also examines the full extent of the overseas or foreign arms trade and the arms operations of the War of Independence, including the continuance into the truce and treaty eras and up to the outbreak of the Civil War (1922â€"1923)—all of which reveals how the rebel leaders ran complex, maturing, and capable smuggling and manufacturing enterprises worldwide under the noses of the police, customs, intelligence, and the military for years without getting caught. Quite apart from the battlefield these groups and their activities led to political consequences, playing no small part in producing what were real concessions from Lloyd George’s government. In the last chapter Kautt offers observations and conclusions about overall successes and failures that establishes Arming the Irish Revolution as a landmark study of insurgent or revolutionary arms acquisition in both Irish and military history.

W. H. Kautt: W. H. Kautt is professor of military history, US Army Command and General Staff College, and author of Ground Truths: British Army Operations in the Irish War for Independence and Ambushes and Armour: The Irish Rebellion 1919â€"1921.