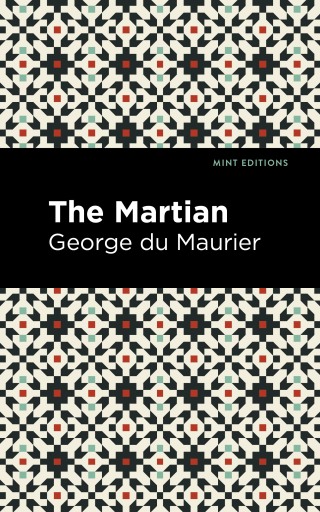 The Martian (1898) is a novel by George du Maurier. Published posthumously, du Maurier’s final novel is a semi-autobiographical account of his struggle with vision loss incorporating elements of fantasy and fairy tale fiction. Originally serialized in Harper’s Magazine, The Martian is a powerful story of romance, tragedy, and redemption. “When so great a man dies, it is generally found that a tangled growth of more or less contentious literature has already gathered round his name during his lifetime. He has been so written about, so talked about, so riddled with praise or blame, that, to those who have never seen him in the flesh, he has become almost a tradition, a myth—and one runs the risk of losing all clew to his real personality.” Barty Josselin is dead, leaving it up to his friend Robert Maurice to present a fair and accurate record of his life and achievements. After graduating from the Institution F. Brossard in Paris, Barty returns to his native England. As his vision begins to fail, causing him suicidal thoughts, he is visited in a dream by a female spirit from the planet Mars. With her guidance, he becomes a renowned writer. With a beautifully designed cover and professionally typeset manuscript, this edition of George du Maurier’s The Martian is a classic of British literature reimagined for modern readers.

George du Maurier (1834-1896) was a Franco-British cartoonist, novelist, and short story writer. Born in Paris, du Maurier was raised in an aristocratic family whose fortunes had dwindled following his paternal grandfather’s implication in a 1789 financial scandal. His mother, Ellen Clarke, was the daughter of courtesan Mary Anne Clarke, the former mistress of Prince Frederick, Duke of York and Albany. Educated in Paris at the art studio of Charles Gleyre, du Maurier moved to Antwerp and Düsseldorf—where he sought help for an ailment in his left eye—before settling in London in 1851. There, he married Emma Wightwick, with whom he would raise five children, some of whom went on to successful careers in the arts. In 1865, du Maurier found work as a cartoonist for Punch magazine, where he gained a reputation as a leading satirist for cartoons poking fun at Victorian society and the burgeoning middle class. In addition to his black and white drawings for Punch, du Maurier produced illustrations for such periodicals as Harper’s, The Graphic, and The Cornhill Magazine. As his eyesight failed, du Maurier turned increasingly to fiction, writing the play Peter Ibbetson (1891) and the popular gothic horror novel Trilby (1894), both of which have been adapted for theater and film.