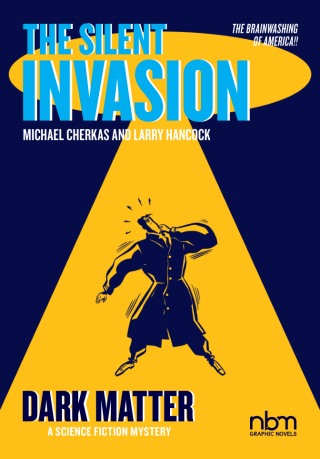 Walter Sinkage's quiet suburban life is shattered when he witnesses several UFOs flash past in the sky. His search for the truth about the UFOS and the suspicious disappearance of his brother Matt, leads him to an alien abduction support group and confrontation with the Church of Cosmic Enlightenment. When Walter also vanishes, police detective Eddy Dime finds himself stymied while trying to uncover the truth behind what happened to the two brothers and other victims of what he believes may be an alien conspiracy that reaches into the highest and murkiest echelons of government power.

Larry Hancock:
Michael Cherkas was born in Oshawa, Ontario in 1954. He has worked for over 30 years as a graphic designer, art director, cartoonist, and illustrator. He still enjoys using non-repro blue pencils, brush, India ink, and paper when making comics. His other comics include Suburban Nightmares (with Larry Hancock and John van Bruggen), The Purple Ray (with Larry Hancock) and The New Frontier (with John Sabli&acute;c). He's been watching the skies for UFOs since he was wonder-struck boy and looks forward to his first sighting. Larry Hancock was born in Toronto, Ontario in 1954. He graduated from the University of Waterloo with a Bachelor of Mathematics and since then has toiled in Toronto as a Chartered Accountant. However, counter to the view of accountants as boring, he has written The Silent Invasion and The Purple Ray with Michael Cherkas and Suburban Nightmares with Cherkas and John van Bruggen. He enjoys reading mysteries, science fiction and comic books (as if you could not guess!).