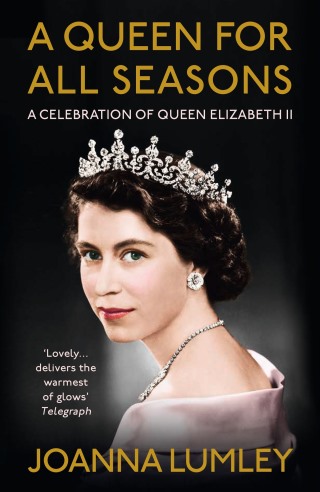 A Queen for All Seasons

A Celebration of Queen Elizabeth II on her Platinum Jubilee

'Who wouldn't love this chocolate-box delight of insights and snapshots of The Queen...A treasure chest' - Good Housekeeping

A sparkling celebration of our much-loved Queen Elizabeth II for her Platinum Jubilee including special writings and illuminating insights around key moments in her 70-year reign, introduced and edited by her biggest fan Joanna Lumley.

In 2022 Queen Elizabeth II celebrates seventy years as Queen and Head of the Commonwealth. She is Britain's longest reigning monarch and the very first to celebrate a Platinum Jubilee.

A Queen For All Seasons, edited and introduced by Joanna Lumley, is a perceptive, touching and engaging tribute to this unique woman. A treasure chest of first-hand writings, insights and snapshots of the Queen during key moments of her reign to form a vibrant portrait of the woman herself and the extraordinary role she plays.

Joanna Lumley guides us as we meet Princess Elizabeth in 1952, aged just twenty-five, and about to become Queen, and brings us through to the present day when, as our matriarch, the Queen keeps the national ship steady, including in moments of crisis and suffering. Here are unique perspectives into some of the most fascinating aspects of the Queen's life - her role as head of state at home and abroad, her private passions and public interests and a bird's-eye look at key events that have held the nation together and the Queen in our affection throughout Britain and beyond.

This book is a special and unique portrait of our constant Queen in an ever-changing world.

Joanna Lumley: Joanna Lumley has been described as 'our most trusted national treasure'. She was born in India and grew up in England and the Far East, celebrating the Queen's coronation as a schoolgirl in Kuala Lumpur. She is a celebrated actress, a former model and Bond Girl, an author and presenter. Her varied screen credits have included Absolutely Fabulous (where she played the legendary Patsy Stone), The New Avengers, and Coronation Street. She is well known for her travel documentaries and as a political activist, including for the Gurkha Justice Campaign.