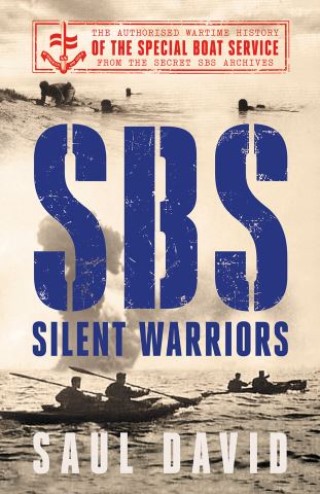 ‘An absolute must-read if you are a fan of derring-do and Andy McNab. I am going to be telling everyone to buy it’ ROB RINDER, TALK RADIO

THE FIRST AUTHORISED HISTORY OF THE SBS.

Britain’s SBS – or Special Boat Service – was the world’s first maritime special operations unit. Founded in the dark days of 1940, it started as a small and inexperienced outfit that leaned heavily on volunteers’ raw courage and boyish enthusiasm. It went on to change the course of the Second World War – and has served as a model for special forces ever since.

The fledgling unit’s first mission was a daring beach reconnaissance of Rhodes in the spring of 1941. Over the next four years, the SBS and its affiliates would carry out many more spectacular operations in the Mediterranean, the Atlantic, the Channel and the Far East. These missions – including Operation Frankton, the daredevil attempt by the ‘Cockleshell Heroes’ to paddle up the Garonne river and sink Axis ships in Bordeaux harbour – were some of the most audacious and legendary of the war.

Paddling flimsy canoes, and armed only with knives, pistols and a few sub-machine guns, this handful of brave and determined men operated deep behind enemy lines in the full knowledge that if caught they might be executed. Many were.

Yet their many improbable achievements – destroying enemy ships and infrastructure, landing secret agents, tying up enemy forces, spreading fear and uncertainty, and, most importantly, preparing the ground for D-Day – helped to make an Allied victory possible.

Written with the full cooperation of the modern SBS – the first time this ultra-secretive unit has given its seal of approval to any book – and exclusive access to its archives, SBS: Silent Warriors allows Britain’s original special forces to emerge from the shadows and take their proper and deserved place in our island story.

Saul David is a historian, broadcaster and the author of several critically acclaimed works of fiction and non-fiction. His history books have been shortlisted for the Westminster Medal for Military Literature and variously named a Waterstones Military History Book of the Year and an Amazon History Book of the Year. He is Professor of Military History at the University of Buckingham.