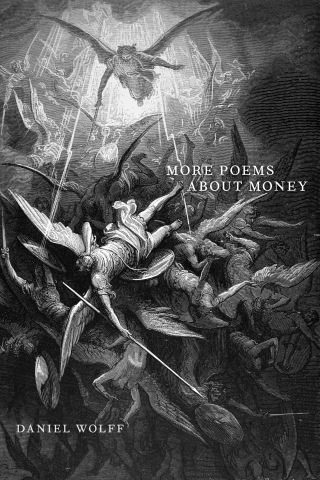 What do global combat and property ownership have to do with sex and sea turtles? According to Daniel Wolff-as it turns out, everything. More Poems about Money looks at the economic times we live in, from boom to bust, from the suburbs to the warzone, in a voice that ranges from humorous to desperate. Grappling with monetary value and how it infringes on self worth, Wolff asks simultaneously timeless and timely questions-Who has capital, who doesn't, and does that ever change?-in a style both humorous and unflinching, sparing not even himself. "'The market runs on credit," Wolff reminds us, "which romantics call yearning. / A flame. Or a sonnet." Yes, art also participates in capitalism as our lyrics stoke the fire of want, fueling this system and getting snuffed by it. Pivoting from the Great Recession toward today's crisis, this undaunted book illuminates the transactions we aren't supposed to talk about, beckoning us toward the future we can't imagine… yet.

Daniel Wolff: Daniel Wolff, as poet, has published three previous collections and a chapbook, made appearances in many literary magazines, been anthologized, collaborated with dancers, sculptors, and print-makers, mailed fictitious letter-poems, done performance pieces, printed broadsides, tacked poems up illegally in subway cars and installed them in peep-shows. He's read across the country as well as on air. He's also published a number of award-winning books as a non-poet.