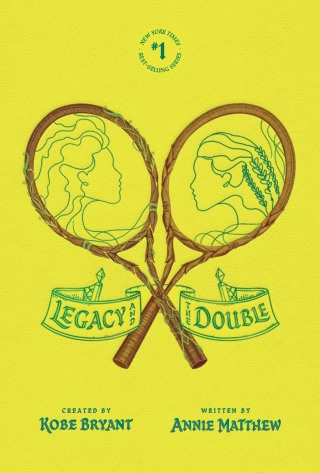 Legacy and the Double

Kobe Bryant’s legacy of uplifting and inspiring young athletes continues in this highly anticipated follow-up to the #1 New York Times bestseller Legacy and the Queen.

Legacy Petrin is a national tennis champion, but she doesn’t feel like one. At the orphanage where she grew up, far from the city where she learned to shine, Legacy struggles to focus on her training. Her famous magical inner light dims and darkens until she barely recognizes herself.

Then a girl who looks exactly like Legacy—same burlap dress, same signature glow—starts playing in Legacy’s name. She wins matches in the city, makes charming speeches in support of “Queen” Silla, and gains a devoted following. Soon, Silla issues a decree against impersonating champions, which means that the real Legacy could be arrested simply for looking like herself.

To reclaim her name and her identity, Legacy has no choice but to compete in disguise . . . until she can rise through the ranks, face off against her imposter, and prove that she is the one and only Legacy Petrin—a champion who was born to shine.

Annie Matthew: Kobe Bryant was an Academy Award winner, a New York Times best-selling author, and the CEO of Granity Studios, a multimedia content creation company. He was also a five-time NBA champion, two-time NBA Finals MVP, NBA MVP, and two-time Olympic gold medalist. Above all else, he was a loving husband and a doting father to four girls. In everything he built, Kobe was driven to teach the next generation how to reach their full potential. He believed in the beauty of the process, in the strength that comes from inner magic, and in achieving the impossible. His legacy continues today.

Annie Matthew is a novelist and a poet. In a former life, she was a professional athlete. She now lives in Iowa with her gray furry dog, Gus.