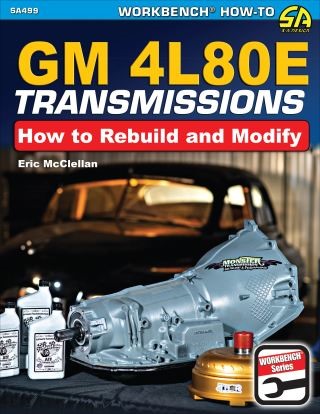 How to Rebuild & Modify

Learn how to rebuild and modify the GM 4L80E transmission!

As the successor to the venerable and popular Turbo Hydra-matic 400 (TH400), the 4L80E was the next flag bearer in GM’s line of automatic transmissions. While serving as the smaller, lighter cousin to the 4L85E, the abundance of 4L80E transmissions manufactured between 1991 and 2013 ensures that these highly capable 4-speed overdrive units will be in service for years to come.

Automatic transmissions are often seen as mysterious and overly complicated, but much of the guesswork has been simplified to its basic elements in this easy-to-follow guide. This book covers the process of identifying the best versions, tearing down the 4L80E, rebuilding, reassembly, and troubleshooting. Upgrades that are available for the 4L80E, which is a popular topic among performance fans and transmission swappers, are also included.

This detailed, step-by-step instructional manual is authored by racer and builder Eric McClellan. Meticulous step-by-step photos of the rebuild process are featured along with torque specs and unique identification of all major and most minor components.

Eric McClellan: Eric McClellan is a lifelong Chevy Corvette, and Camaro enthusiast. He has authored two previous General Motors-related titles: How to Build Max Performance LT1/LT4 Engines with Myron Cottrell and Swap LS Engines into Camaros and Firebirds (1967-1981). Eric has contributed to countless articles for automotive magazines. He handbuilt many street and race cars and currently enjoys his rare-optioned C6 Z06/Z07.