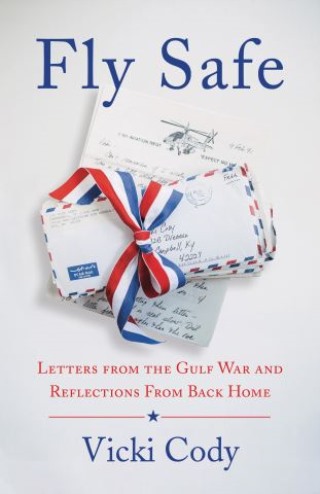 Letters from the Gulf War and Reflections From Back Home

It is August 1990, and Iraq has just invaded Kuwait, setting off a chain reaction of events leading up to the first Gulf War. Vicki Cody’s husband, the commander of an elite Apache helicopter battalion, is deployed to Saudi Arabia—and for the next nine months they have to rely on written letters in order to stay connected.

From Vicki’s narrative and journal entries, the reader gets a very realistic glimpse of what it is like for the spouses and families back home during a war, in particular what it was like at a time when most people did not own a personal computer and there was no Internet—no iPhones, no texting, no tweeting, no Facetime. Her writing also illuminates the roller coaster of stress, loneliness, sleepless nights, humor, joys, and, eventually, resilience, that make up her life while her husband is away. Meanwhile, Dick’s letters to her give the reader a front row seat to the unfolding of history, the adrenaline rush of flying helicopters in combat, his commitment to his country, and his devotion to his family back home. Together, these three components weave a clear, insightful, and intimate story of love and its power to sustain us.

Vicki Cody: Vicki Cody grew up in Burlington, Vermont, and graduated from the University of Vermont in 1975 with a bachelor’s degree in education. For the next thirty-three years, she was an Army wife, supporting her husband in his career. She has appeared on several media programs, including CNN, MSNBC, C-Span, and Soldier Television and Radio, discussing her writings and Army family issues. Her memoir, Army Wife: A Story of Love and Family in the Heart of the Army, published in 2016 by She Writes Press, won the 2016 USA Best Book Award for narrative non-fiction and was a Finalist for the 2016 Foreword Indies Book of the Year in the military category. It was also named in Kirkus Reviews top 100 books of 2016. Cody is also the author of Your Soldier, Your Army: A Parents' Guide and, most recently, the revised edition, Your Soldier, Your Army: A Family Guide, both of which were published by the Association of the United States Army. Her articles have appeared in numerous military magazines and publications. She and her husband of forty-five years live in the Washington DC area.