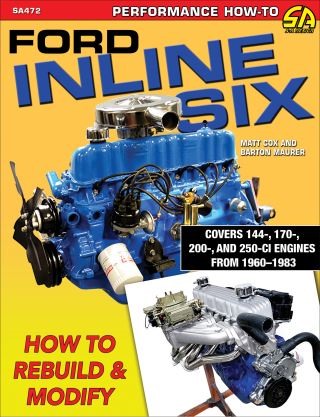 How to Rebuild & Modify

Rebuild and modify your Ford Inline Six with help from the leading performance builders of these engines, Vintage Inlines!

Covering Ford’s small six-cylinder engine made famous in Falcons, Comets, Mustangs, and many other models from the 1960s and 1970s, this book has everything you need to know from step-by-step rebuilding instructions to performance parts that will set you apart from the rest of the crowd. If this is your first engine build, you’ll be glad to know that every aspect of a complete rebuild is here. Starting with engine removal, you’ll learn all the different steps, including examination, machine work, reassembly, and reinstallation. The mystery is revealed on setting ring gap, checking valve-to-piston clearance, even degreasing the camshaft for spot-on valve timing!

Whether it’s replacing the undersized and outdated one-barrel carburetor or the original Load-O-Matic distributor, you’ll learn how to get the most from the engine that came as original equipment in literally millions of our favorite Ford vehicles. With the information in this book, you’ll learn how to add a two-barrel carburetor, electronic ignition, and even a header so you can have the smooth rumble of dual exhaust.

Matt Cox: Matt Cox has been an avid Ford six-cylinder fan since he got his first car in 1979--a six-cylinder 1966 Mustang. His love of cars, mainly Mustangs and six-cylinder engines, turned into his career starting as a technician with a Lincoln/Mercury dealership. He then launched himself into work with one of the Big Three in Detroit where he works today.|||

Bart Maurer was born into the automotive industry. Growing up in a family who owned a full-service garage, an auto parts store, and then an automotive machine shop, Bart had experience in everything from sweeping the floor and stocking shelves to cylinder head and block machining. His keys to success are learning from his mistakes, thinking with an open mind, and listening to others.