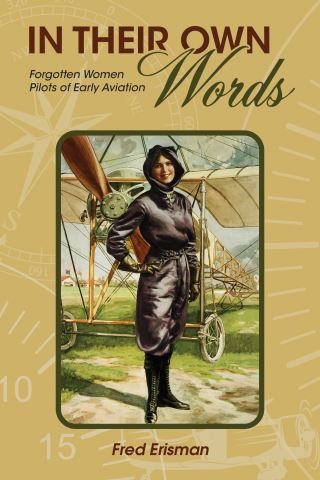 In Their Own Words

Amelia Earhart’s prominence in American aviation during the 1930s obscures a crucial point: she was but one of a closely knit community of women pilots. Although the women were well known in the profession and widely publicized in the press at the time, they are largely overlooked today. Like Earhart, they wrote extensively about aviation and women’s causes, producing an absorbing record of the life of women fliers during the emergence and peak of the Golden Age of Aviation (1925–1940). Earhart and her contemporaries, however, were only the most recent in a long line of women pilots whose activities reached back to the earliest days of aviation. These women, too, wrote about aviation, speaking out for new and progressive technology and its potential for the advancement of the status of women. With those of their more recent counterparts, their writings form a long, sustained text that documents the maturation of the airplane, aviation, and women’s growing desire for equality in American society.

In Their Own Words takes up the writings of eight women pilots as evidence of the ties between the growth of American aviation and the changing role of women. Harriet Quimby (1875–1912), Ruth Law (1887–1970), and the sisters Katherine and Marjorie Stinson (1893–1977; 1896–1975) came to prominence in the years between the Wright brothers and World War I. Earhart (1897–1937), Louise Thaden (1905–1979), and Ruth Nichols (1901–1960) were the voices of women in aviation during the Golden Age of Aviation. Anne Morrow Lindbergh (1906–2001), the only one of the eight who legitimately can be called an artist, bridges the time from her husband’s 1927 flight through the World War II years and the coming of the Space Age. Each of them confronts issues relating to the developing technology and possibilities of aviation. Each speaks to the importance of assimilating aviation into daily life. Each details the part that women might—and should—play in advancing aviation. Each talks about how aviation may enhance women’s participation in contemporary American society, making their works significant documents in the history of American culture.

Fred Erisman is the Lorraine Sherley Professor of Literature Emeritus at Texas Christian University in Fort Worth. A specialist in American cultural history, he holds a PhD in American studies from the University of Minnesota. His works include studies of aviation materials, children’s literature, science fiction, detective and suspense fiction, and the American West.