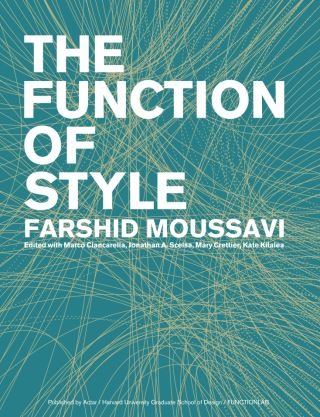 The Function of Style

What is the function of style today? If the 1970s were defined by Postmodernism and the 1980s by Deconstruction, how do we characterize the architecture of the 1990s to the present? Some built forms transmit affects of curvilinearity, others of crystallinity; some transmit multiplicity, others unity; some transmit cellularity, others openness; some transmit dematerialization, others weight. Does this immense diversity reflect a lack of common purpose? In this book, acclaimed architect and theorist Farshid Moussavi argues that this diversity should not be mistaken for an eclecticism that is driven by external forces.

The Function of Style presents the architectural landscape as an intricate web in which individual buildings are the product of ideas which have been appropriated from other buildings designed for the different activities of everyday life, ideas which are varied to produce singular buildings that are related to one another but also different. This network of connections is illustrated on the cover of this book (and in more detail inside).

Moussavi argues that, by embracing everyday life as a raw material, architects can change the conventions of how buildings are assembled, to ground style, and the aesthetic experience of buildings, in the micro-politics of the everyday.

The third volume in Moussavi’s ‘Function’ series, The Function of Style provides an updated approach to style which can be used as an invaluable and highly productive tool by architects today.

Farshid Moussavi: Farshid Moussavi is an internationally acclaimed architect and Professor in Practice of Architecture at Harvard University Graduate School of Design. She was previously co-founder of the London-based Foreign Office Architects (FOA). Moussavi has completed her first U.S. commission, the Museum of Contemporary Art in Cleveland (2012), its installation at the 13th Architecture Biennale in Venice (2012), and The Victoria Beckham Flagship Store in London (2014), and she is currently working on a wide range of prestigious international projects including residential complexes in the La Défense district of Paris and in Montpellier, as well as a department store in Paris, France; and an office complex in the City of London, UK.