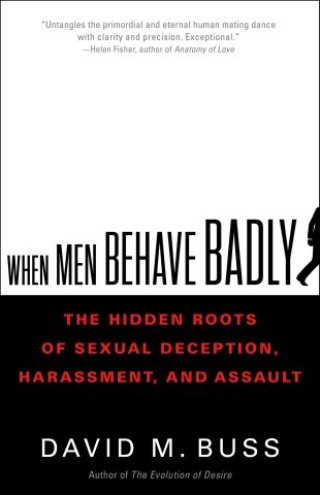 The Hidden Roots of Sexual Deception, Harassment, and Assault

A leading evolutionary psychologist and sex researcher provides a unified new theory of sexual conflict and shows how its battles play out in the bar room, the bedroom, and the boardroom.

Sexual conflict permeates ancient religions, from injunctions about thy neighbor's wife to the permissible rape of infidels. It is etched in written laws that dictate who can and cannot have sex with whom. Its manifestations shape our sexual morality, evoking approving accolades or contemptuous condemnation. It produces sexual double standards that flourish even in the most sexually egalitarian cultures on earth. And although every person alive struggles with sexual conflict, most of us see only the tip of the iceberg: dating deception, a politician's unsavory sexual grab, the slow crumbling of a once-happy marriage, a romantic breakup that turns nasty.

When Men Behave Badly shows that this "battle of the sexes" is deeper and far more pervasive than anyone has recognized, revealing the hidden roots of sexual conflict—roots that originated over deep evolutionary time—which define the sexual psychology we currently carry around in our 3.5-pound brains. Providing novel insights into our minds and behaviors, When Men Behave Badly presents a unifying new theory of sexual conflict, and offers practical advice for men and women seeking to avoid it.

David Buss:
David Buss is professor of psychology at the University of Texas at Austin and a past president of the Human Behavior and Evolution Society. He is the author of several books including The Evolution of Desire, The Dangerous Passion, The Murderer Next Door, and Why Women Have Sex (co-authored with Dr. Cindy Meston). He has written for publications such as the New York Times, Los Angeles Times, and Psychology Today, and he has made more than thirty television appearances on shows including CBS This Morning, ABC's 20/20, and NBC's Dateline and Today, among others. Buss has received numerous awards, which include the Distinguished Scientific Award for Early Career Contribution to Psychology by the American Psychological Association (APA), a Fellowship at the Center for Advanced Study in the Behavioral Sciences at Stanford, and the G. Stanley Hall Award from the APA. Most recently, he received the Association for Psychological Science (APS) Mentor Award for Lifetime Achievement (2017).