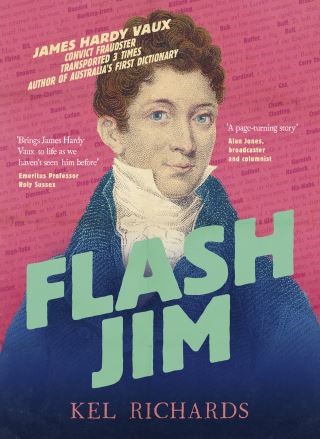 If you wear 'togs', tell a 'yarn', call someone 'sly', or refuse to 'snitch' on a friend then you are talking like a convict.

These words, and hundreds of others, once left colonial magistrates baffled and police confused. So comprehensible to us today, the flash language of criminals and convicts had marine officer Watkin Tench complaining about the need for an interpreter in the colonial court.

Luckily, by 1811, that man was at hand. James Hardy Vaux - conman, pickpocket, absconder and thief, born into comfortable circumstances in England - was so drawn to a life of crime he was transported to Australia ... not once, but three times!

Vaux's talents, glibness and audacity were extraordinary, and perceiving an opportunity to ingratiate himself with authorities during his second sentence, he set about writing a dictionary of the criminal slang of the colony, which was recognised for its uniqueness and taken back to England to be published.

Kel Richards tells Vaux's story brilliantly, with the help of Vaux's own extraordinarily candid memoir of misdeeds - one of the first true-crime memoirs ever published. Kel's book combines two of his favourite subjects: the inventiveness, humour and origins of Australian English, and our history of fabulous, disreputable characters.

With echoes of The Surgeon of Crowthorne as well as Oliver Twist, Flash Jim is a ripping read - especially for those who appreciate the power of words and the convict contribution to our idiom.

'James Hardy Vaux was a con-man with a talent for words who wrote the first dictionary of Australian English. Kel Richards is a word-man with a talent for telling a stirring story about the con-man. In Flash Jim Kel Richards brings James Hardy Vaux to life as we haven't seen him before' - Emeritus Professor Roland Sussex, School of Languages and Comparative Cultural Studies, University of Queensland

'An engaging tale from a great student of our language about one of the conmen who gave Australia its character - and its distinctive slang' - Andrew Bolt, broadcaster and columnist

'One of the strongest bonds binding the people of Australia together is the Australian language. We speak a dialect of English richer and more colourful than most. When we call someone a "hoon" or invite a friend to a "barbie" we know immediately what we're talking about - but we have to translate for overseas visitors. This powerful cultural bond was, as Kel explains, built on four foundations. And the most colourful of those four was convict slang. The role that it played, and still plays, in the Australian language, and the story of the man who first recorded it is - as we used to say - a "ripping yarn". It makes a page-turning story' - Alan Jones, broadcaster and columnist

'There's never been a more important time to truly understand our Australian history and this book is a great introduction to the richness of our language and a wonderful window onto the real life of colonial Australia from my favourite wordsmith, Kel Richards' - Peta Credlin, broadcaster and columnist

Kel Richards is a veteran Australian author, journalist and broadcaster. In a long career he has hosted the ABC's flagship national daily radio current affairs show AM, worked as a senior journalist and associate producer with ABC television current affairs, and hosted his own talkback shows on commercial radio. Kel is currently a Sky News contributor and a writer for The Spectator Australia. He famously presented News Radio's regular 'Wordwatch' segment on ABC (till 2010) and now writes a column on language for Australian Geographic.