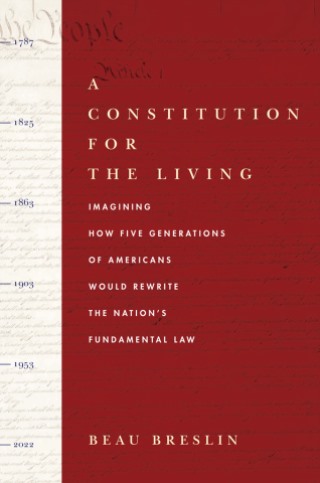 A Constitution for the Living

What would America's Constitutions have looked like if each generation wrote its own?

"The earth belongs...to the living, the dead have neither powers nor rights over it." These famous words, written by Thomas Jefferson to James Madison, reflect Jefferson's lifelong belief that each generation ought to write its own Constitution. According to Jefferson each generation should take an active role in endorsing, renouncing, or changing the nation's fundamental law. Perhaps if he were alive today to witness our seething debates over the state of American politics, he would feel vindicated in this belief.

Madison's response was that a Constitution must endure over many generations to gain the credibility needed to keep a nation strong and united. History tells us that Jefferson lost that debate. But what if he had prevailed? In A Constitution for the Living, Beau Breslin reimagines American history to answer that question. By tracing the story from the 1787 Constitutional Convention up to the present, Breslin presents an engaging and insightful narrative account of historical figures and how they might have shaped their particular generation's Constitution.

Readers are invited to join the Founders in candlelit taverns where, over glasses of wine, they debated fundamental issues; to witness towering figures of American history, from Abraham Lincoln to Booker T. Washington, enact an alternate account through startling and revealing conversations; and to attend a Constitutional Convention taking place in the present day. These possibilities come to life in the book's prose, with sensitivity, verve, and compelling historical detail.

This book is, above all, a call for a more engaged American public at a time when change seems close at hand, if we dare to imagine it.

Beau Breslin: Beau Breslin is Professor of Political Science at Skidmore College. He is the author of From Words to Worlds (2009) and The Communitarian Constitution (2004, 2006).