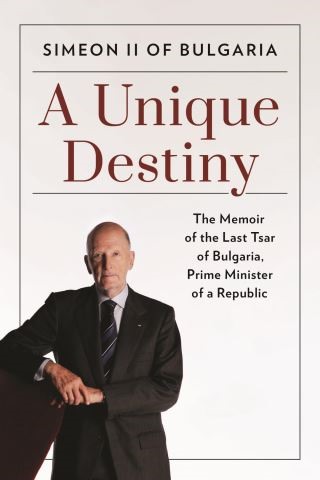 The Memoir of the Last Tsar of Bulgaria, Prime Minister of a Republic

During World War II, most of Europe’s last monarchies collapsed. Under Tsar Boris III, Bulgaria had been a reluctant ally of Hitler’s Germany, refusing to send troops to fight the Soviets and resisting the Holocaust. But after Boris died in 1943, the Red Army entered the country, and communists executed much of the royal family and sent the boy-tsar, Simeon II, into exile, first to Turkey and Egypt, then to Spain. In 2001, Simeon was elected prime minister of Bulgaria in a landslide that swept out the country’s two major parties. The crown jewel of his time in power was bringing Bulgaria into NATO. He peacefully left power in 2005.

In the first English translation of this colorful memoir, Simeon—the world’s last tsar and one of two living heads of state from World War II (with the Dalai Lama)—recounts with honesty and humor an eventful life from Bulgaria to Spain and the United States, and back to Bulgaria, and into the world. His life’s story includes crossing paths with Queen Elizabeth II of England, the Shah of Iran, General Franco of Spain, Hassan II of Morocco, and many other royalty, as well as helping to integrate Bulgaria into a new democratic global system.

Simeon II of Bulgaria was the last tsar of Bulgaria from 1943 to 1946, and later its prime minister from 2001 to 2005. In exile, he attended the Lycée Français in Madrid and then the Valley Forge Military Academy near Philadelphia. After a career in business, he returned to Bulgaria after the fall of communism and was elected prime minister. The first edition of this book was formally presented to UNESCO.