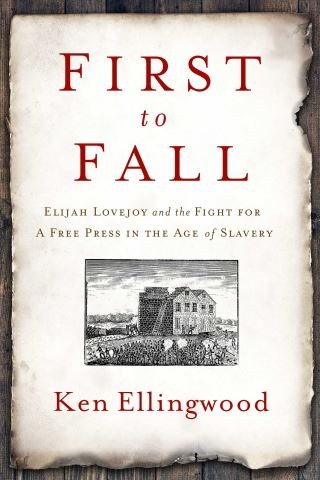 A vividly told tale of a forgotten American hero—an impassioned newsman who fought for the right to speak out against slavery.

The history of the fight for free press has never been more vital in our own time, when journalists are targeted as “enemies of the people.” In this bnrilliant and rigorously researched history, award-winning journalist and author Ken Ellingwood animates the life and times of abolitionist newspaper editor Elijah Lovejoy.

First to Fall illuminates this flawed yet heroic figure who made the ultimate sacrifice while fighting for free press rights in a time when the First Amendment offered little protection for those who dared to critique America’s “peculiar institution.”

Culminating in Lovejoy’s dramatic clashes with the pro-slavery mob in Alton, Illinois—who were torching printing press after printing press—First to Fall will bring Lovejoy, his supporters and his enemies to life during the raucous 1830s at the edge of slave country. It was a bloody period of innovation, conflict, violent politics, and painful soul-searching over pivotal issues of morality and justice.

In the tradition of books like The Arc of Justice, First to Fall elevates a compelling, socially urgent narrative that has never received the attention it deserves. The book will aim to do no less than rescue Lovejoy from the footnotes of history and restore him as a martyr whose death was not only a catalyst for widespread abolitionist action, but also inaugurated the movement toward the free press protections we cherish so dearly today.

Ken Ellingwood: An award-winning journalist, Ken Ellingwood has been posted in the San Diego, Mexico City, Jerusalem, and Atlanta bureaus of the Los Angeles Times. He is the author of the critically acclaimed (and prescient) work of investigative journalism Hard Line: Life and Death on the U.S.-Mexico Border. He currently lives in Abu Dhabi.