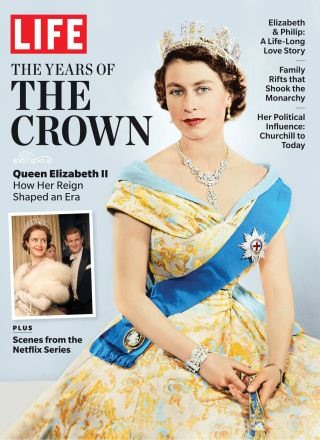 LIFE The Years of the Crown

There is a royal way of being-stoic, dry-eyed, and most importantly, private. And by maintaining an air of opacity despite their very public lives, scandals, and mishaps, the royal family has captured the attention and intrigue of the world. Readers buy tabloids promising to expose their secrets, viewers have tuned in to watch their special moments since Elizabeth first took the throne, books telling inside accounts have sold millions of copies. The world eagerly wants to learn as much as they can about what this royal family is like behind closed doors. That's why the streaming hit The Crown, which has earned high praise for its relatively accurate historical account of Queen Elizabeth's life, has been held in such high regard by viewers season after season. The show evolves with the Queen's life, the cast rotating as the real-life royals grow in both age and confidence in their roles. And for all the insight the Netflix series provides, the real-life version of these stories, is just as rich and compelling. This special edition is a chronicle of the highs and lows of Queen Elizabeth's monarchy, with &#8220;on-screen&#8221; photo gallery interstitials showing the same moments in her life from