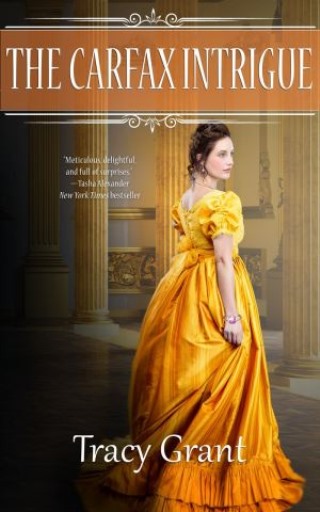 June 1820. Britain’s former prince regent, now George IV, is determined to divorce his estranged wife, Queen Caroline, and the coming trial is the talk of London, from Mayfair to Westminster to Seven Dials, dredging up scandalous details and pitting Whigs against Tories in a battle for power. When former spies Malcolm and Mélanie Rannoch learn their enemies in the mysterious Elsinore League are trying to sell letters that could prove key at the trial, the Rannochs are determined to intercept these vital papers before they can be used against Queen Caroline.

The exchange is to take place in the candlelit splendor of Carfax House, at the first ball Malcolm and Mélanie’s friends Julien and Kitty are giving in their new roles as Lord and Lady Carfax. But Malcolm and Mélanie aren’t the only ones determined to intercept the letters. Amidst a night of champagne and waltzing, Mélanie and Malcolm find themselves entrapped in an intrigue that may be as deadly as any they faced in the Napoleonic Wars...

Tracy Grant: Tracy Grant studied British history at Stanford University and received the Firestone Award for Excellence in Research for her honors thesis on shifting conceptions of honor in late-fifteenth-century England. She lives in the San Francisco Bay Area with her young daughter and three cats. In addition to writing, Tracy works for the Merola Opera Program, a professional training program for opera singers, pianists, and stage directors. Her real life heroine is her daughter Mélanie, who is very cooperative about Mummy's writing time. She is currently at work on her next book chronicling the adventures of Malcolm and Suzanne Rannoch. Visit her on the web at www.tracygrant.org