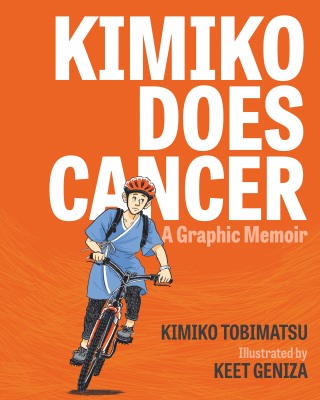 • Kimiko Does Cancer is another title in the growing genre of “Graphic Medicine”: graphic novels or nonfiction that deal with health issues. Last year we had great success with Dear Scarlet, the graphic memoir about postpartum depression that was widely acclaimed (including a New York Times rave); in 2020 it was longlisted for the highly visible Canada Reads competition on CBC.
• When the author Kimiko Tobimatsu was diagnosed with breast cancer, she found herself thrust into a world she wasn’t familiar with. In her own words: “I kept having these interactions with doctors and fellow cancer patients that reflected such a different world view than the bubble than I typically occupied -- queer, lefty-types. For example, doctors who just assumed I would want breast reconstruction if I got a mastectomy or cancer patients who had the same disease but had different political views than mine.”
• For Filippinx illustrator Keet Geniza, the subject matter was also personal: “I was drawn towards this project because at the time Mika approached me for it, my father was sick (and dying) of cancer and it was perhaps (selfishly) a way of mitigating grief, to give me something else to think about. And I also believe that a queer woman of color’s story is always worth telling, especially that illness narratives (especially cancer/chronic illness) need more QPOC representation.”
• Kimiko Does Cancer upends the traditional cancer narrative by telling it from a young, queer, and BIPOC perspective.
• The book is also interesting for not ending with Kimiko’s cancer going into remission; we also witness her struggles with PTSD as she attempts to return to a semblance of a normal life after having gone through the trauma of cancer.
• The book will appeal to cancer patients and survivors, and their families, especially queer and BIPOC.
• Publicity by Beth Parker PR in New York.