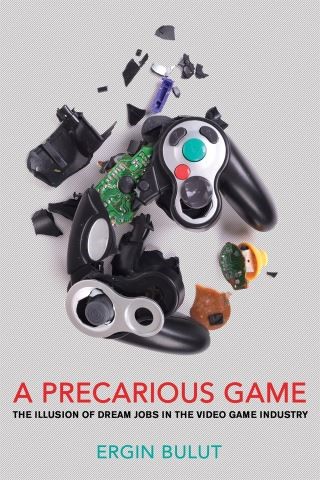 The Illusion of Dream Jobs in the Video Game Industry

A Precarious Game is an ethnographic examination of video game production. The developers that Ergin Bulut researched for almost three years in a medium-sized studio in the U.S. loved making video games that millions play. Only some, however, can enjoy this dream job, which can be precarious and alienating for many others. That is, the passion of a predominantly white-male labor force relies on material inequalities involving the sacrificial labor of their families, unacknowledged work of precarious testers, and thousands of racialized and gendered workers in the Global South.

A Precarious Game explores the politics of doing what one loves. In the context of work, passion and love imply freedom, participation, and choice, but in fact they accelerate self-exploitation and can impose emotional toxicity on other workers by forcing them to work endless hours. Bulut argues that such ludic discourses in the game industry disguise the racialized and gendered inequalities on which a profitable transnational industry thrives.

Within capitalism, work is not just an economic matter, and the political nature of employment and love can still be undemocratic even when based on mutual consent. As Bulut demonstrates, rather than considering work simply as a matter of economics based on trade-offs in the workplace, we should consider the question of work and love as one of democracy rooted in politics.

Ergin Bulut is Assistant Professor in the Department of Media and Visual Arts at Koç University. He is currently a visitor researcher at the Institute for Advanced Study, Princeton, and a faculty fellow at the Center for Advanced Research in Global Communication at Annenberg School for Communication. He is co-editor of Cognitive Capitalism, Education and Digital Labor, and you can follow him on Twitter @ergincloud.