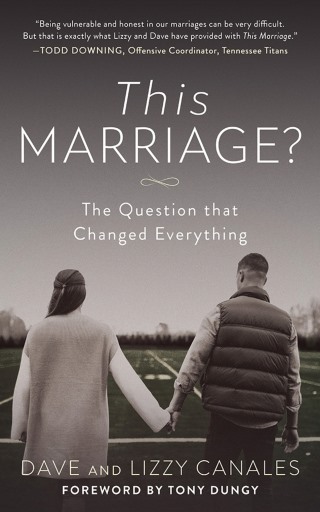 The Question that Changed Everything

“Being vulnerable and honest in our marriage can be very difficult. But that is exactly what Lizzy and Dave have provided in This Marriage.”—Todd Downing, Offensive Coordinator, Tennessee Titans

Have you ever said to yourself “there has got to be more to marriage than this?”

Nine years in, they could check all the boxes: a promising career in the NFL, two beautiful kids, fitness, friends, and financial security. It was picture perfect until one jarring question from a desperate wife shook the foundation of their marriage and exposed the truth.

Have you come to a point in your marriage where it is time to make a decision?

Will you settle for the status quo indefinitely?

Do you feel like giving up and getting out?

Are you ready to go deeper at any cost?

If these questions strike a chord with you, you’ve picked up the right book. You will find yourself here as Dave and Lizzy Canales recount their journey with poignant and often painful honesty.

Whether you’re fighting to save your relationship, walking in redemption, or anything in between, This Marriage? is an invitation into the high-risk adventure of an authentic and thriving marriage.

Dave Canales, author and American football coach who is the offensive passing game coordinator for the Seattle Seahawks of the NFL.

Named to Seattle’s coaching staff on February 4, 2010, Dave Canales entered the NFL after one season as USC’s offensive administrative assistant in 2009.

Canales enters his first season as the Seahawks offensive passing game coordinator after spending two years as the team’s quarterbacks coach (2018-19) and three years as the wide receivers coach (2015-2017).

In Canales’ ten years with the Seahawks, he has played a variety of instrumental roles in helping the team to eight playoff appearances. He served as assistant quarterbacks coach for two years, during the Super Bowl XLVIII championship season and the 2014 NFC Championship season. He was the quality control/offense coach the previous three years working with wide receivers and quarterbacks (2010-2012).

At USC in 2009, he was an assistant strength coach, video assistant and worked with quarterbacks, during a year that the Trojans won the Emerald Bowl.

He came to USC from El Camino (Calif.) College, where he was the tight ends coach and special teams coordinator, coaching quarterbacks in his final season (2006-08). The Warriors football team won the California Community College State Championship in 2006 and won the Mission Conference twice during his tenure.

It was during his time at El Camino College that Canales forged an invaluable relationship with Pete Carroll and the USC staff through working as a part-time coach at the annual Pete Carroll football camps.

David and his wife, Lizzy, and four children, Ashby, Benjamin, Beatrice and Amaya live in the Seattle area.

Lizzy Canales, author, speaker, High school and college athlete turned wife and mom to four amazing children. Lizzy has been teaching Crossfit for 9 years and inspiring others that they too can “get into shape” and have life-long functional strength and ability.

She holds a Masters in Secondary Health Education, is passionate about nutrition, the mountains, nature and doing anything challenging that makes her better.

Her and husband Dave Canales live in the Seattle area with their four children Ashby, Benjamin, Beatrice and Amaya.