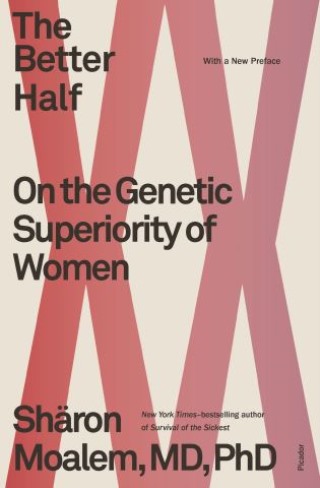 On the Genetic Superiority of Women

A Guardian Book of the Week

Here are some facts: Women live longer than men. They have stronger immune systems. They're better at fighting cancer and surviving famine, and even see the world in a wider variety of colors. They are simply stronger than men at every stage of life. Why is this? And why are we taught the opposite?

To find out, Dr. Sharon Moalem drew on his own medical experiences - treating premature babies in the neonatal intensive care unit; recruiting the elderly for neurogenetic studies; tending to HIV-positive orphans in Thailand - and tried to understand why in every instance men were consistently less likely to thrive. The answer, he discovered, lies in our genetics: two X chromosomes offer a powerful survival advantage.

With clear, captivating prose that weaves together eye-opening research, case studies, diverse examples ranging from the behavior of honeybees to American pioneers, as well as experiences from his personal life and his own patients, Moalem explains why genetic females triumph over males when it comes to resiliency, intellect, stamina, immunity and much more. He also calls for a reconsideration of our male-centric, one-size-fits-all view of medical studies and even how we prescribe medications - a view that still sees women through the lens of men.

Revolutionary and yet utterly convincing, The Better Half will make you see humanity and the survival of our species anew.

Sharon Moalem, MD, PhD, is an award-winning scientist, physician, and New York Times bestselling author. He is a world-renowned expert in genetics and rare genetic conditions whose clinical research led to the discovery and description of two new rare genetic conditions. Dr. Moalem has served as an associate editor for the Journal of Alzheimer’s Disease and is the cofounder of two biotechnology companies.

He has been awarded more than twenty-five patents worldwide for his inventions in human health and biotechnology. His scientific work led to his discovery of a first-in-class member of a novel type of antibiotic compound that addresses the paucity of available drugs for superbug infections caused by microorganisms such as methicillin-resistant Staphylococcus aureus (MRSA).

His work brings together evolution, genetics, biology, and medicine. He is the author of the New York Times bestseller Survival of the Sickest, as well as How Sex Works, The DNA Restart, and Inheritance: How Our Genes Change Our Lives—and Our Lives Change Our Genes, and The Better Half. His books have been translated into more than thirty-five languages.